What are Holographic Versatile Discs (HVD)? 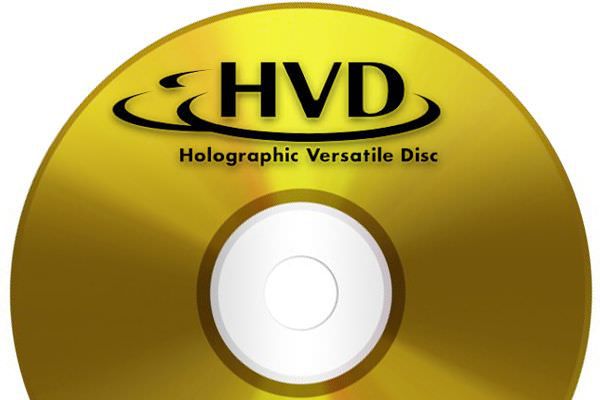 Hold onto your hats because optical media as a format isn’t done yet. A new (to the masses) format for optical discs is on the cusp of market viability. When it comes to storing data, most of us have already forgotten on how innovative and life altering the introduction of compact discs and other optical media storage was for us. Even USB drives are becoming antiquated. Everything is digitally stored now on cloud software. However, many still strongly believe in the opportunity that disc media offers a modern world, which is where Holographic Versatile Discs (HVD) come in.

HVDs are a development in optical media that stores data on three dimensions (as opposed to two), allowing it to store up to 6TB of data. Only half that amount is the equivalent of 830 DVDs. This is monstrously huge as the highest storage capacity for USB drives has only recently been extended to 1TB (and are very pricey). Most cloud users can also only reach 1TB, although this isn’t typical and definitely not free. 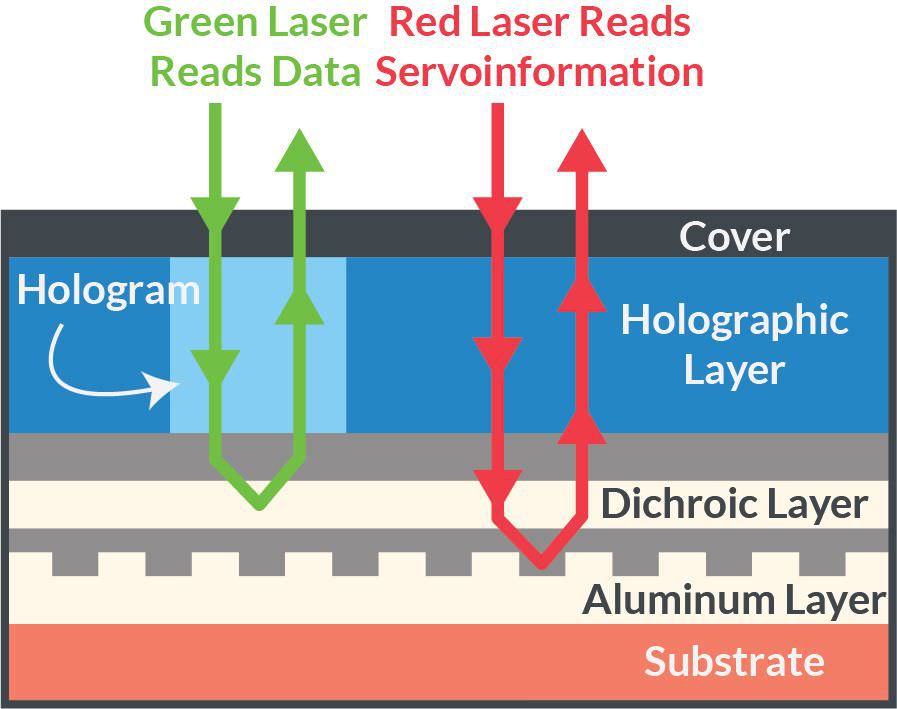 HVDs are named after their three-dimensional storage nature, and unfortunately not due to the ability to produce visual holographic images as some might expect from their names. The way they function however is brilliant. They have a reduced radius compared to normal discs which helps keep down costs and materials. They use collinear holography which utilizes a green and a red laser beam to collimate, or become accurately parallel with each other. Each beam reads information differently. The green reads the data which is encoded as laser interference on the holographic layer, which is located near the top. The red beam is a reference for the position of the reader and reads servoinformation (which provides feedback for correction) from the aluminum layer at the bottom. There is a dichroic mirror layer that allows the red laser to pass while refracting the green. This is a huge jump from previous iterations in that it utilizes servoinformation and does not suffer from too much interference.

Though this technology was developed between 2004 and 2008, it is not available on the market. Despite their development around the peak of Blu-ray and DVD disc use, HVDs never were released and many deadlines for them to be introduced have since passed.  Why is this? We speculate it’s for a combination of reasons: cost and more favorable technology. Like any new technology, HVDs and related devices like players and readers are prohibitively expensive. Single discs are projected to run between $120-180USD while drives are estimated to initially cost $15,000USD. Prices are expected to fall as time progresses. Home computers used to be for the rich as well, costing around $1,300USD (adjusted to 2019 equivalent). However, the initial sticker shock turns most away, especially when they could utilize other digital mediums for significantly less and with more convenience.

Which leads to another obstacle: digital streaming and digital media formats. The mid 2000s saw a booming increase in media consumed digitally, either through streaming services like Netflix and Hulu, websites like YouTube, or file sharing/pirate sites like Limewire or Piratebay. Buyers liked being able to store whole libraries on one computer or TV without the hassle of physical storage and damage. No more loading the disc tray or trying to buff out scratches to the disc, either.

However, digital methods for consuming media and storing data has its drawbacks. Data and bandwidth caps plus brand limiting policies put a serious damper in the idea of transferring everything to a digital cloud. They still cost money and the more space you require, the higher your bill. There’s also that sneaky thing that some providers do where even if you “purchase” a movie for instance, you don’t really “own” that movie until the end of time. It can still disappear from your library. You also are limited by what the provider makes available. For music streaming this is very frustrating because companies only want to provide the best selling, most popular songs and artists. It takes up a lot of resources to host this data so this makes sense but it’s a far cry from being able to find almost anything you want (as long as it wasn’t irritatingly obscure) in a record or CD store.

Arguably the biggest issue with digital storage and streaming is that it requires an internet connection to function, limiting its use and exposing it to security threats. While viruses and other nasty bugs can be downloaded onto optical media, it is considered a safer, “cold storage” option. Data also expounds upon itself so we are seeing an ever increasing need for more and more storage capacities, making the potential 6TB HVD very attractive.

Combined with their mega storage capabilities and an increasing public demand for permanence and physical existence in media, it’s possible that we could see HVDs released in the near future. So unfortunately, while they have nothing to do with futuristic holographic images from science fiction, these discs are still an exciting potential for our future digital world.